The town was chosen for its proximity to Finale Ligure, famous destination in Italy for MTB lovers and because the trails of the upland of Verezzi for three years have been included in the stages of the Enduro World Series race. 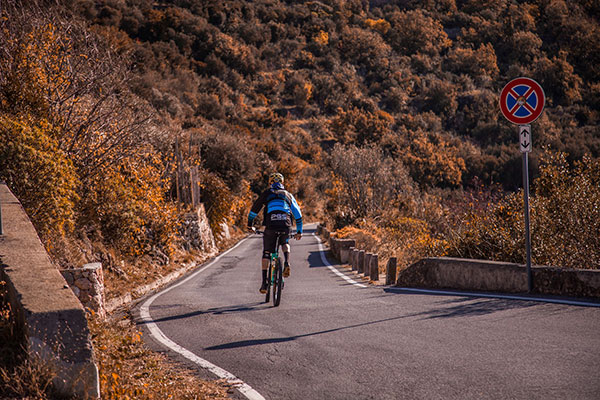 It is a “ring tour” which includes three different trails.
It starts from the downtown of Borgio Verezzi and it goes on the upland of the village, from where all the trails start and it ends on the seafront. It has some uphill sections with paved roads with an average gradient of less than 9%. From every track you can enjoy an excellent sea view.

The Enduro Tour starts early in the morning on a sunny day.
You cross the downtown and take the panoramic climb that leads to Verezzi (about 5 km).
In less than half an hour you arrive at Bastia, from where the Bondi Trail starts, which crosses the Verezzi upland.

At the end of the first trail we start again from the first hairpin bend of the Verezzi ascent.
You pedal for 25 minutes until you reach the church of San Martino.
It's a great place where to stop, having a coffee and admiring the sea view.

Now you go down towards the wood of Verezzi to reach the next stage which it is called X-Men, the second trail.
It descends along the Finale Ligure side of the hill till it ends directly in Finale Ligure.
Once this part is over, you take the Napoleonic gravel road.

In 30 minutes you get to the church of San Martino where the last trail called “Natura” starts.

It descends steeply towards Borgio, first on a rocky track and then on a natural trail, crossing the old town of Verezzi.

It ends in front of the Pump Track, in the downtown of the village. Of course you can ride in the Pump Track area until it gets dark. 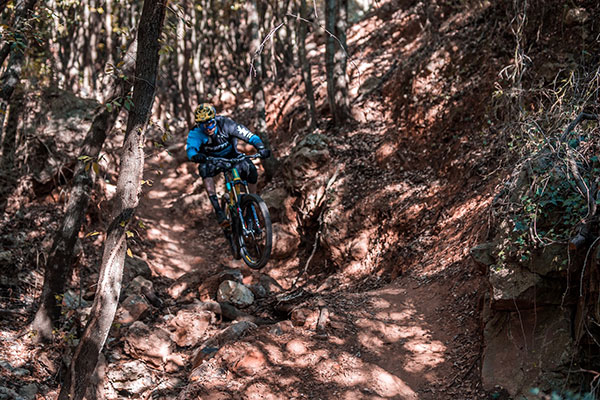 The trail is fun in an “endure” style. It consists of raises, pedaling parts and "Flow", with banks and drops and with some rocky parts.
In 2015 the Bondi Trail was included among the special stages of the Enduro World Series of Finale Ligure. 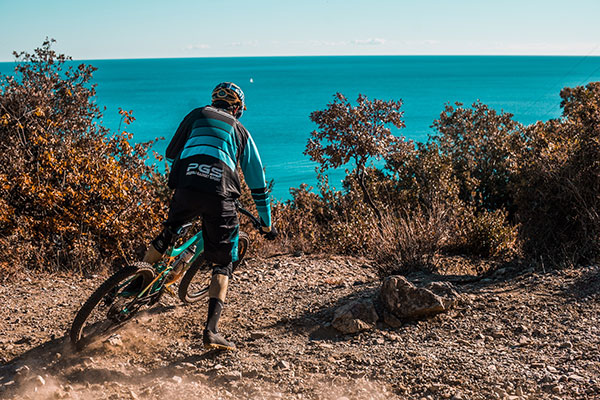 It is one of a kind and it has been adapted to fit into the Enduro World Series stages last October.
It is a real Enduro track, characterized in the central part by hairpin bends and banks, while in the final, after the Napoleonic road (photo), there is a technical “wall” with a staircase that only the most experienced riders can ride on two wheels. On this last part you can enjoy an amazing Seaview.

It starts from the church of San Martino passing through the old roads and the central square of Verezzi, from there it joins a trail characterized by some rocky parts.
The track goes down towards Borgio, where you cross the old town and then you arrive right in front of the Pump Track.
This is an amazing trail and it is used for riding and for trekking. 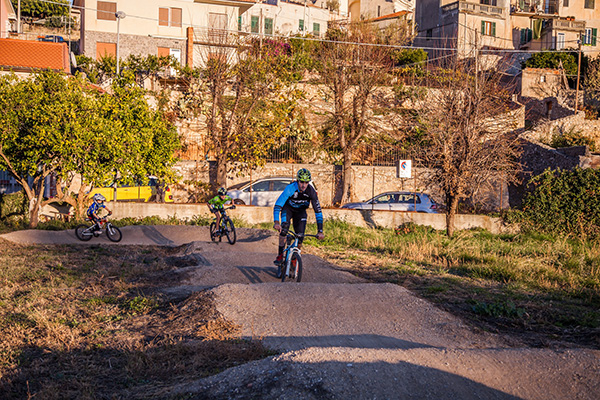 It is located in an area of over 2000 m², a few steps from the old downtown of Borgio Verezzi and only 300 meters from the sea.
It is the ideal place to learn MTB techniques and to train, both for adults and for children.

At the following link you will find our accommodation facilities where to stay in Borgio Verezzi:
Click here